This document is written for Debian and derived distributions. Other Linuxes should be pretty similar.

This document assumes you are familiar with the Linux shell at least for basic file operations like ls, cp, mkdir, rmdir, file permissions, environment variables, bash scripts etc. Otherwise we suggest to learn about Working in a UNIX shell.

Set up a virtual Python environment¶

Rather than installing Lino into your site-wide Python installation, you install it to a separate virtual Python environment, also known as a virtualenv

If virtualenvs are new to you: the reason for creating a new environment is to separate Lino from your system-wide Python. The main advantages are: if you are also developing other things with Python you might require different packages than what Lino uses, and there is the chance of version or dependency conflicts.

Before using virtualenvs, we must install the feature:

In a developer environment we suggest ~/lino/env as your default environment. So here we go:

The dot (.) is a synonym for the source command. If you didn't know it, read the manpage and What does 'source' do?

After creating a new environment, you should always update pip and setuptools to the latest version:

You can deactivate a virtual environment with the command deactivate. This switches you back to your machine's system-wide environment.

You can switch to another virtualenv simply by activating it, you don't need to deactivate the current one first.

You should never rename a virtualenv (they are not designed for that), but you can easily create a new one and remove the old one.

To learn more, read Dan Poirier's post Managing multiple Python projects: Virtual environments where he explains what they are and why you want them.

As a developer you probably don't want to type source ~/lino/env/bin/activate each time you open a new terminal with Ctrl+Alt+T. So you should set your default environment.

The default virtualenv you use when developing.

How to set up your default environment

(#) Instruct your favourite code editor to use this default environment when doing syntax checks or finding definitions.

Make sure your default environment is activated and then install getlino via pip:

In case you have used getlino on your machine before (maybe another virtualenv, but the same machine), then you might want to delete your configuration files before going on:

It asks a lot of questions, but you can hit ENTER for each of them.

Warning : when getlino does not react to ENTER but asks a [y or n] question, then you should read it and understand it before you hit y. getlino overwrites certain configuration files without making a backup copy. Read twice before you hit y!

For details about each question or if something doesn't work as expected, see the documentation about getlino.

Remarks about some questions:

You may replace the name noi in above command by other names. The available choices are listed in List of known Lino applications. 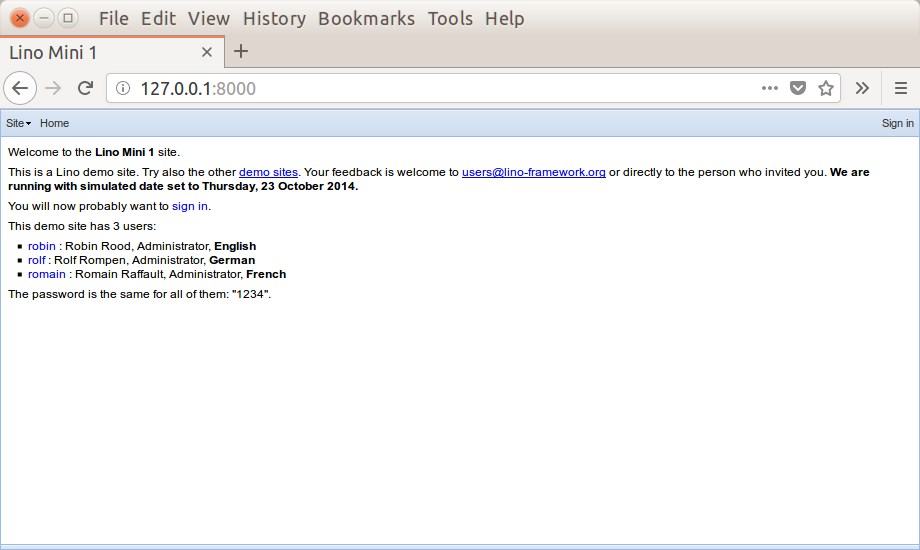 Congratulations! Enjoy the first Lino site running on your machine!

Using virtual environments can be a challenge for newbies. Here are some diagnostic tricks.

How to see which is your current virtualenv:

How to see what's installed in your current virtualenv:

The output will be about 60 lines of text, here is an excerpt:

The getlino script does a lot of work.

These commands take some time when you run them the first time on your machine because they will download and install all Python packages needed by Lino. If you install them a second time into another environment, the process will be quicker because the dependencies have been cached.

The -e command-line switch for pip causes it to use the "development" mode. The first argument after -e is not a project name but a path to a directory of your local filesystem. Development mode means that these modules run "directly from source". pip does not copy the sources to your Python site_packages, but instead adds a link to them.

A quick test when you want to see whether Lino is installed is to say "hello" to Lino:

In case you didn't know: Python's -m command-line switch instructs it to just import the specified module (here lino.hello) and then to return to the command line.

A set of tools configured on the desktop computer of a Lino developer who wants to develop their own Lino application.

An extended developer environment suitable for developers who plan to potentially contribute to the Lino framework. A bit more work to install, but more future-proof.